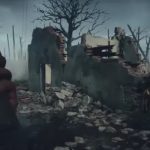 Battlefield 1, the upcoming World War I shooter game, will have five War Stories. An intro cinematic was introduced during a TwitchCon covering one of these war stories and giving us a brief look on how different the life was before and during the Great War.

Battlefield 1 Intro Cinematics video has two scenes. The first one covers Through Mud and Blood mode of Battlefield 1 and shows the moments from a tank crew member life. The video starts with the guy sitting in an expensive car and goes further with the same guy in the war field, being taken to the tank and introduced to other team members.

While the second scene from the Battlefield 1 Intro Cinematics video shows a man in a bed surprisingly turning being in the epicenter of the battle and fighting as a soldier. It plays before the Storm of Steel mode.

Battlefield is planned to be launched on October 21. World War I shooter game will be available on PC, Xbox One and PS4. A limited version of the game is available earlier for EA/Origin Access subscribers. Moreover, if you wish, you can purchase Battlefield 1 special edition for $80 and get a three-day early access. Lately, another trailer of Battlefield 1 single-player campaign was released, showing more of the war stories and multiple characters in them. Additionally, one more video was announced showing moments of the battle against the Ottoman Empire.

DICE, the developer of Battlefield 1, stated that the decision to create multiple characters for each of the five war stories helps to bring the broader view to the World War I and makes the game more diverse as well: “We decided on an anthology format; a set of characters with their own more focused stories. That way we can have immersion and variety–a double win.”